One of the significant research focuses at the DiRAC Institute has been the development of next generation asteroid and comet discovery algorithms. DiRAC researchers have published a pre-print detailing one such algorithm called “Tracklet-less Heliocentric Orbit Recovery” (THOR). Applied to observations from the Zwicky Transient Facility (ZTF), THOR recovered 97% of the known objects with at least 5 observations, a factor of 1.5-2 more than the current generation of discovery algorithms. In addition to recovering most of the known objects, THOR would have discovered nearly 500 new Solar System objects (including a parabolic/hyperbolic comet) had it been running when the observations were made in 2018.

The Hammer and the Comet

One of the significant research focuses at the DiRAC Institute has been the development of next generation asteroid and comet discovery algorithms. DiRAC researchers have published a pre-print detailing one such algorithm called “Tracklet-less Heliocentric Orbit Recovery” (THOR). Discovering minor planets involves having current generation astronomical surveys observe the same area of the sky at least twice in one night. The two sets of observations of the same region of the sky can then be scanned for what is known as a “tracklet”: a motion vector made of at least two observations that could represent the actual motion of a Solar System object. This observing pattern is repeated over the course of a 2-week window until enough tracklets are observed so that they can be used to discover asteroids and comets.

Requiring tracklets for Solar System discovery has two striking consequences: first, any astronomical survey with the goal of discovering minor planets must observe the same area of sky at least twice in one night thereby limiting the amount of sky the telescope could observe in a single night. Second, any dataset that was not constructed with a tracklet building cadence is not a dataset suitable for Solar System discovery. Leveraging the latest innovations in Solar System discovery and backed by large scale computing, THOR has addressed these concerns by removing the requirement for tracklets to be made and enabling minor planet discovery without the need for a specific cadence of observations.

As a proof-of-concept demonstration, THOR was applied to two weeks of observations from the Zwicky Transient Facility (ZTF) that were taken in early September 2018. THOR recovered 97% of all Solar System objects known at the time. ZTF’s own discovery algorithm, ZMODE, which relies on tracklet-like observations for discovery, could at best recover 68% of the same population. The Vera C. Rubin Observatory’s discovery algorithm which also relies on tracklets would at best recover 45% of the same population. In other words, by enabling Solar System discovery without requiring a specific pattern of observations, THOR can recover 1.5-2 times as many asteroids and comets as the current generation of algorithms. Of the 21,000+ orbits that were recovered by THOR, 488 were identified as high quality discovery candidates that could not be associated with any objects that were known in 2018.

DiRAC researchers then posed the question: had THOR been running on ZTF when the data were taken in 2018, how many asteroids and comets would it have discovered? Of the 488 discovery candidates identified, THOR would have discovered at least 477 new asteroids and comets had it been running as ZTF’s discovery algorithm when the observations were made.

The observations and best-fit trajectories of the 11 remaining objects are shown in the figure. Subsequent analysis showed that of the 11 candidates, 10 are as yet undiscovered objects. The e > 1 candidate (2nd row, 3rd column) represents “precovery” observations of parabolic/hyperbolic comet C/2018 U1 that was discovered on October 27th 2018 by the Mount Lemmon Survey. Precovery observations are observations of an object that pre-date its original discovery date. The ZTF data on which THOR was tested and developed were taken 6-8 weeks prior to the discovery date of this comet. Had THOR been running in September 2018, it would have allowed ZTF to claim the discovery of this fascinating object. 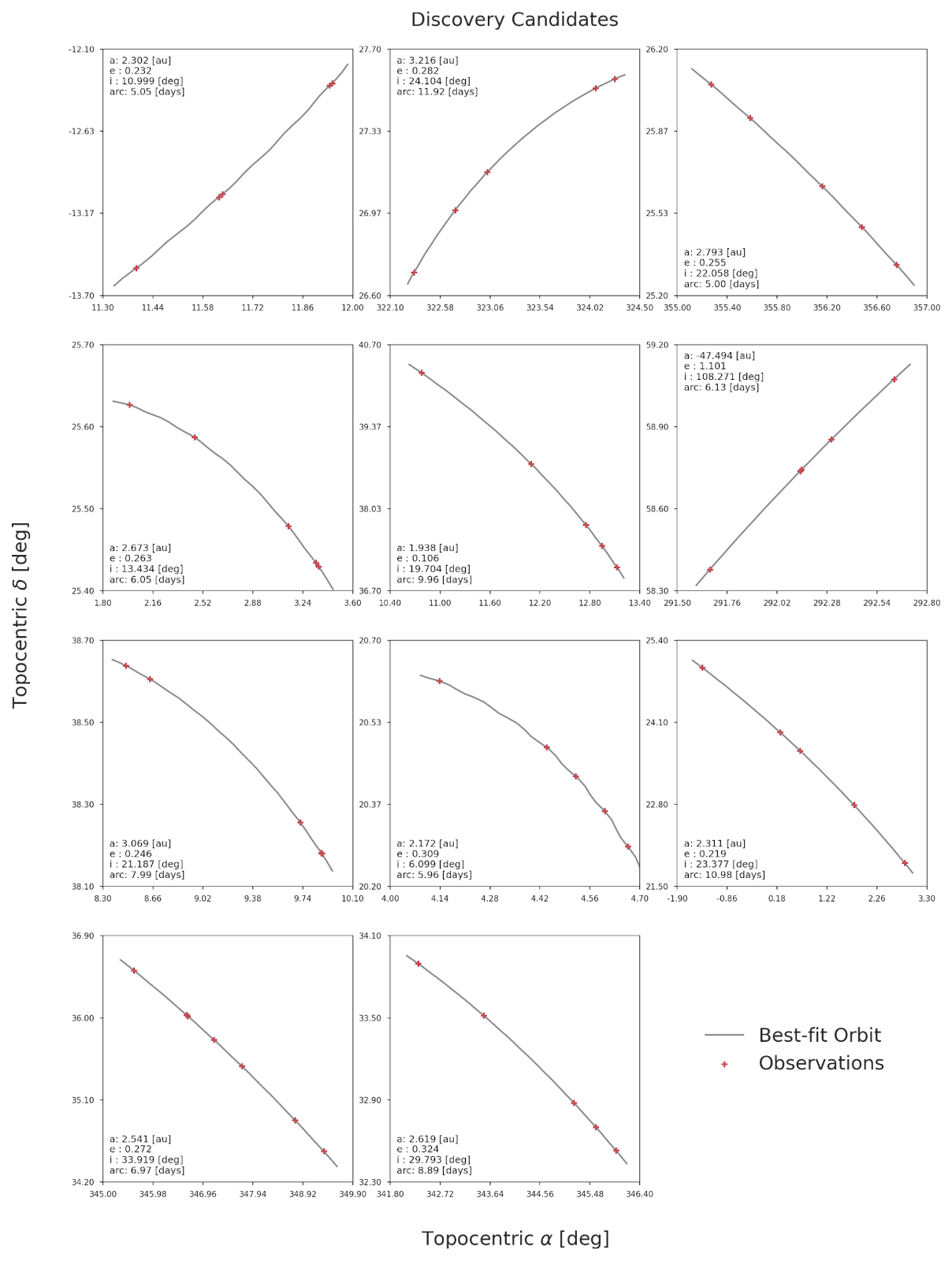 Following their success using just two weeks of ZTF observations, the research team behind THOR is now working to process all three years of ZTF observations. They anticipate this should yield the discovery of several hundred new Solar System objects. THOR is completely open-source and available on GitHub. The eventual goal of the THOR project is to launch a discovery service where surveys can submit their observations and, powered by THOR, they can be processed and analyzed for the discovery of new asteroids and comets.

Joachim Moeyens is a graduate student in the Department of Astronomy at the University of Washington. He is interested in big data and software driven solutions to problems in astronomy. During his undergraduate studies at the University of Washington, he was presented with the opportunity to work on a research project for the Vera Rubin Observatory’s Legacy Survey of Space and Time (LSST).  For his doctoral thesis, Joachim is working on algorithms that discover minor planets in astronomical surveys, in particular, on Rubin Observatory’s Solar System Processing pipelines, and on a novel algorithm named Tracklet-less Heliocentric Orbit Recovery (THOR).

DIRAC IS SPONSORED BY